Note: written correspondence should be addressed to the Secretary or one of the other club contacts, and not to this address.

*Use postcode WD18 7HF for Satnavs when approaching the southern side of the park.

The Club's lawns can be found in Watford near the southern boundary of Cassiobury Park, towards its eastern end. By road, Cassiobury Park lies near the junction of the A411 with the A412, a few miles from exits 18, 19 or 20 of the M25 to the north-west of London, and from exit 5 of the M1. Watford Junction mainline station is under a mile away in the town centre.

The Park entrance nearest to the courts is opposite the end of Shepherds Road, off Cassiobury Park Avenue, close to Watford Station at the terminus of the Metropolitan underground line on the southern side of the park. Watford Junction main-line station is about a mile away, around 20 minutes on inter-city trains or 50 minutes by London Overground from Euston; there are usually taxis available outside the station.

Visitors arriving by road from the north and east of Cassiobury Park may find it easier to park in the streets adjacent to the north of the park. The nearest pedestrian's Park entrance is opposite the end of Stratford Way, which is a turning off the A411 (Hempstead Road), and there are others opposite the ends of The Gardens and Langley Way, and by the eastern end of Cassiobury Drive.

Visitors arriving by road from the south and west may find it easier to use the car-park in Cassiobury Park at the end of Cassiobury Park Avenue or Gade Avenue which are turnings off the A412 (Rickmansworth Road). Unfortunately however this is no longer free and limited to a maximum 6 hour stay. 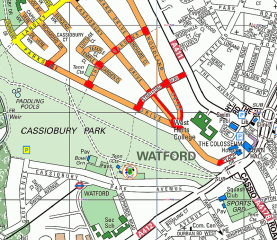 North of Cassiobury Park: there is now a Controlled Parking Zone in the Cassiobury Estate (the streets immediately to the north of the Park). This operates from September to June and prevents parking Monday-Friday between 10:30 am and 2:30 pm in some areas (basically the orange areas on the adjacent map), and Monday-Saturday all day in some others. Outside these times, and all day in July and August, parking remains free (orange areas), as it does at all times and all year in the streets further to the west (yellow areas). During restricted periods the nearest free non-weekend street parking can be found on Parkside Drive to the west of Richmond Drive, about 800m NW of the croquet courts. However, this may become rather full.

South of Cassiobury Park: there are restrictions in Cassiobury Park Avenue and Shepherds Road which both reduce the available space and restrict the time-periods it can be used. To be specific, there is no parking on one side of these two roads on Mondays to Fridays from 9 to 11 am, and no parking on the other side from 2 to 4 pm. Check the roadside signs to find out on which side you can park. Please also note that parking spaces in these streets become particularly hard to find when there is an event of some kind taking place in the park or nearby, especially on Saturday mornings at around 9am when the weekly Park Run is taking place.

If you wish to park there all day on a weekday you will need to move your car in the middle of the day. If this is impractical then you can use the car-park inside Cassiobury Park about 600m west of the croquet courts, though this now requires payment of a parking fee and limits the stay to a maximum of 6 hours. This car park can be reached off Gade Avenue at the end of Cassiobury Park Avenue (for Satnavs use the postcode WD18 7LG). It is however unlikely to be suitable for all day use by players in most matches or tournaments, but the club will normally advise visitors for these events in advance about what parking options are available for their particular event.

The locations of other croquet clubs in England and Wales can be found on the Croquet Association website. The Watford club is one of the clubs in the East Anglian Croquet Federation.