Some interesting facts about croquet that may surprise you. 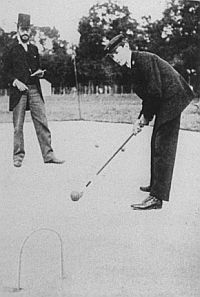 from the 1900 Olympic
croquet tournament

There were teams from 17 countries at the last croquet World Championships.

Croquet is not just a British game, or even just a relic of the British Empire. Amongst the 17 countries participating in the 2010 world team championships, staged in England, were Belgium, the Czech Republic, Germany, Japan, Norway, Spain, and Sweden. The top division was a 4-way Test Match between Britain, Australia, New Zealand and the USA. Britain won, for the 7th consecutive time. It's a pity that croquet has not been an Olympic sport since 1900!

Currently there are 30 countries across 5 continents which are members of the World Croquet Federation. 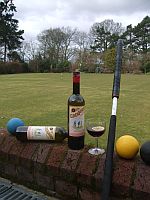 There is a French aperitif called "Croquet".

It is a wine with bitters ("quinquina"), of which one of the main ingredients is quinine. It makes a tasty aperitif that can be drunk straight or on ice. The sole producer is a distillery in Souillac, a French town in the Lot department on the edge of the Dordogne, which is run by a certain Louis Roque. (Yes, really.) To the best of our knowledge, the sole UK importer at present is a member of the Watford club... 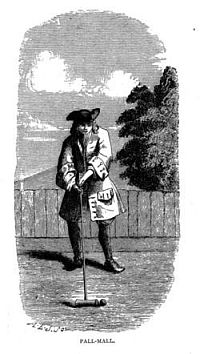 There are two London streets named after a precursor of the game.

In the 16th and 17th centuries in some London streets it was popular to play a game which involved hitting a ball with a mallet the length of the street and through an iron hoop at the end. Two London streets, Pall Mall and The Mall (where King Charles II enjoyed playing), eventually took their name from the game - from the French "paille maille", meaning ball & mallet, or perhaps from the Italian equivalent "pallamaglio".

Some sources describe "pall-mall" as the precursor of both croquet and golf, as it resembles the former for the equipment used and the latter for the nature of the game. Others claim that the modern game of croquet evolved independently in Ireland and was imported to England in the 19th century.

The older game was popular in many cities of Europe, and similar street names evolved for the Rue du Mail in Paris, Palmaille in Hamburg, the Malieveld in The Hague, the Maliebaan in Utrecht, and so on.

The diarist Samuel Pepys referred to the older game as "pell mell", and it may have given rise to this expression, meaning in a chaotic rush (sic), perhaps a reflection of the manner in which the game was then played! When the game later fell out of fashion and the streets in which it was played sometimes evolved into shopping areas, it gave its name to the term "shopping mall". 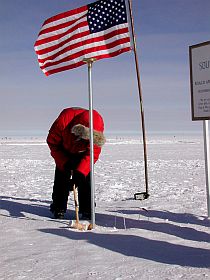 Croquet has even been played in Antarctica

Although fine grass is the preferred outdoor playing surface in the summer, and the smoother and flatter the better (the best courts are laser-levelled), in winter croquet is also sometimes played indoors on a carpet.

Grass does not grow too well in Antarctica, however, so the croquet enthusiasts in the U.S. National Oceanic and Atmospheric Administration at their South Pole Observatory station, altitude 2837 metres, play on snow and ice instead.

For the Queen's Diamond Jubilee in 2012, a group of British scientists also played croquet at the Halley Research Station on the Brunt Ice Shelf, in temperatures of -30°C and winds of 40mph.

a half-jump solves it

Croquet is a 3-dimensional game.

It is perfectly legitimate, and occasionally very useful, to strike a ball in such a way as to make it jump over an obstacle. This can happen for example if another ball ends up getting in your way when you want to run a hoop.

Sometimes in Association Croquet you may even want to jump through a hoop over an obstructing ball, but move the other ball clear of the hoop at the same time as well - that's when a half-jump is a handy variant.

"When the game [R.A. Fitzgerald's XI v London Ontario 1872] ended there was time for a brief croquet tournament. Grace partnered Fitzgerald, and they played the local lady champions, whom they ungallantly beat, though 'not without a good struggle'." 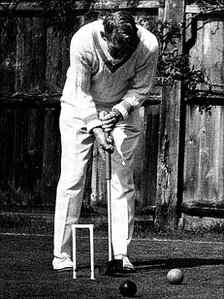 Wimbledon was originally a croquet club.

The "All England Croquet Club" was founded in Wimbledon in 1868, at a time when croquet courts were popular features in the grounds of some of the larger houses in England. Lawn tennis was a sport with rising popularity, and two tennis courts fit nicely into the space occupied by one croquet court. So to reflect the evolving fashions of the day, the Wimbledon Club changed its name in 1877 to the "All England Croquet and Lawn Tennis Club", and 22 years later to "The All England Lawn Tennis and Croquet Club". Croquet was still played there until 2007, when the court was moved to the grounds of nearby Southlands College.

As a consulting engineer for the new retractable roof over the Centre Court at Wimbledon, completed in 2009, Prof. Bernard Neal was not only a long-standing member of the Wimbledon club but also the President of the national Croquet Association. (At age 87 he was still a formidable croquet opponent too, as this author knows to his cost.)

A good croquet ball must be manufactured to very accurate specifications, and yet remain bright, unblemished and with an exactly spherical shape after repeated powerful impacts against mallets, hoops, balls and other hard objects. It must also have high elasticity and stable performance characteristics over a large range of temperatures and weather conditions.

Measurements with high-speed videos have shown that when struck with a mallet, a ball will accelerate from rest to its maximum velocity in as little as 0.6 milliseconds, which can briefly result in forces in excess of 1500 G.

Impact with a solid cast-iron hoop shows that the force is sufficient to flex the hoop upright to a clearly visible extent for a few milliseconds.

A good croquet ball is a piece of high quality engineering. 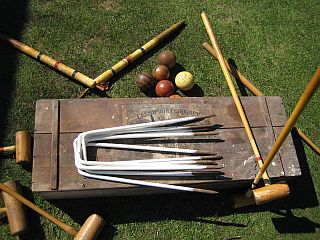 The Earl of Essex manufactured the "Cassiobury Croquet Set".

In the 1860s Cassiobury Park was attached to Cassiobury House, the home of the sixth Earl of Essex, Arthur Algernon Capel. The Earl was a croquet enthusiast, and started a company that marketed the "Cassiobury Croquet Set" which was manufactured in his own sawmills.

Cassiobury House was eventually demolished in 1927 and the adjacent parkland sold to Watford Council who laid some croquet courts shortly afterwards. The Cassiobury Croquet Club was formed, and was later renamed the Watford (Cassiobury) Croquet Club.

The club still remains active today, over 80 years on. The "Cassiobury Croquet Set" is however no longer manufactured or used at the club, and is now a collector's rarity.

Watford (Cassiobury) Croquet Club is not responsible for the contents of external websites.